Musings of Spring Holidays and Chocolate

Easter candy and Passover treats for your holiday celebration 2021: Revised and Reposted

Passover has always been one of my favorite holidays. Not only did it mean spring was here; it was also an opportunity to feast with loved ones – and we were celebrating freedom! In my family, as it did for most holidays, the celebration included chocolate. When I started Laughing Gull Chocolates, focusing on transparently traded cacao, I realized the irony. The Haggadahs that guided our Seders the first two nights of Passover implored us to remember enslaved people around the world, in addition to others who were not free, such as Jewish families prohibited from practicing their religion. Every year, we finished our dinner with chocolate desserts, yet the chocolate we consumed had questionable sourcing. Since its beginning, the chocolate industry has exploited people growing and harvesting cacao throughout the chocolate belt. I felt compelled to find a way to observe Passover with chocolate in a way that appropriately honored the holiday. 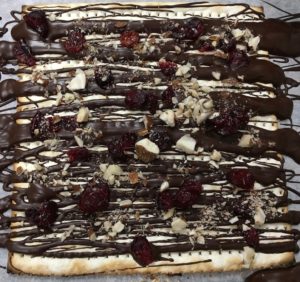 The exploitation in the cacao industry, which often includes the use of children as slaves, juxtaposes the freedom we commemorate during Passover. It is as old as chocolate is, common even before the Europeans arrived in the Americas, and the unfortunate practice grew from there. These unjust practices are what originally peaked my interest in the story of chocolate. My  undergraduate capstone paper focused on these questions: “Food of the Gods or Cash Crop,” I called it. Issues at hand? In 1641, a Spanish Jesuit priest named Cristobol de Acuña wrote that he believed the wild cacao trees in the Amazon basin would “undoubtedly be sufficient to enrich not one, but many kingdoms.” His prediction proved true. By the early seventeenth century, the rich appeal of cacao had already caused a great demand for a market in the Americas and in Europe. The promise of wealth encouraged exploitation of colonized peoples across the world. Cacao production continued to increase through the colonial period and the cacao market expanded globally.

This trend continues even today, centuries later. In fact, a 2015 Tulane University and U.S. Department of Labor study documented 12,000 slaves and more than 2 million children working under hazardous conditions on cacao farms in West Africa. As I was first learning of the bitter secrets of chocolate in the early 2000s, it occured to me: how could we indulge in chocolate harvested by child laborers during a Passover Seder while in the previous breath, we promised “Never Again”? Would it be possible to happily enjoy chocolate again?

“Satan wears many guises…”  Comte de Reynaud wrote for Father Henri in Chocolat, “at times [he is] the maker of sweet things, mere trifles – for what could seem more harmless, more innocent, than chocolate.” Chocolat, of course, is fictional. In the book and subsequent movie, Vianne wanted to open her chocolaterie during Lent, and was stigmatized for it. In reality, many people choose to give up chocolate for Lent. Easter, in some ways like the Jewish holiday, has also long been associated with chocolate – and more than just the Easter egg hunts my mom organized. Catholic clergy have long questioned the morality of consuming chocolate around the holiday, debating if it broke the ecclesiastical fast; other clergy prohibited all chocolate at church. Meanwhile, 16th century Spanish nobleman and politician, Francisco de Quevado y Villegas claimed that chocolate was associated with the Devil: “There came the devil of tobacco and the devil of chocolate, who avenged the Indies against Spain, for they have done more harm…” Chocolate consumption became so controversial that at least two popes weighed in; Pope Alexander VII finally settled the matter in the early 17th century.

Giving up chocolate for Lent is still common, as is celebrating with lots of chocolate on Easter. Intentionally seeking out ethically sourced chocolate for Passover is also more common. As Chief Chocolatier at Laughing Gull, I am choosing to share some of my family holiday traditions with you. At Laughing Gull Chocolates, we’ve even created some of our own new traditions, with hopes that you and your families will enjoy them together this year.

Some of our creations are described below.

Eggs, meaningful in both Easter and Passover, are age-old representations of fertility. This year, Laughing Gull Chocolates is taking these ancient traditions and reinventing them – much like we are reinventing our spring holidays due to the state of the world in this new age of social distancing. Ethically sourced chocolate eggs? Check! Filled with peanut butter? Homemade caramel? Check! Chocolate drizzled matzah? Check! Complete with dried fruits and nuts! We’ve got all your chocolate desserts and treats covered for the spring holidays: caramel eggs, chocolate dipped macaroons (with a new, first-time local collaboration with the great Get Caked Bakery!), and of course our one-of-a-kind fluffles (our homemade raspberry fluff enrobed in a pure dark chocolate).

Although throughout history and even more recently, the morality of chocolate has been questionable, we are proud of our sourcing and the quality of our chocolate. Whatever form your holiday celebration, seders and Easter baskets take this year, we would love for our products to bring some joy to your family! They certainly will for ours!

Unique Gifts for an Almost Out of the Woods Mothers Day 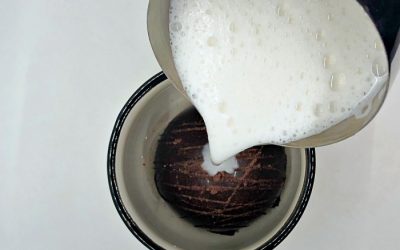 A Most Chocolatey New Year

A Most Chocolatey New YearA Bittersweet Goodbye? They say hindsight is 2020.  I hope that is true for the year 2020. It’s been quite a year. For me personally, it is the year my family grew to a family of four as we welcomed our second daughter in March. Pandemics,... 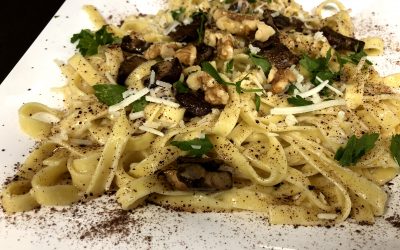 Featured Recipe Cooking with ChocolateSpiced Chocolate FettuccineIt’s #NationalPastaDay and the day came just in the nick of time. I was hungry, and on my (miles long) list of things to do was experiment with cooking with chocolate. Since I have a baby at home, and...